Every gravestone tells a story

One of the oldest and most prominent gravestones in Edgar Cemetery was erected about 1890 to mark the burial site of William P. Dole, a prominent resident of Paris in the mid-1800s who befriended Abraham Lincoln and followed the 16th President to Washington.

The gravestone of William P. Dole was severely damaged in 2013 when a huge limb laden with acorns fell during a severe thunderstorm. 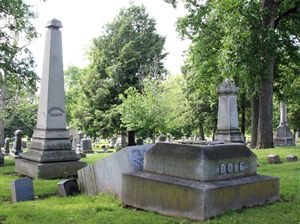 Dole’s position in the cabinet of President Abraham Lincoln and his unique place in local and national history prompted historians to raise funds for restoration of the 4 ton granite monument.

But it’s what happened between those lines that makes this man’s story so memorable, especially for residents of Edgar County.

According to the The History of Edgar County, Illinois, published in 1879, Dole first arrived in the Illiana area about 1821 when his parents moved from Ohio and settled in Colemen’s Grove, two miles north of Terre Haute, IN, and about one mile from Fort Harrison on the Wabash River.

Dole left their home in 1831 and started his career in Clinton, IN, where he was a grocer and dry goods merchant, among other things. He occasionally traveled down the Mississippi on a flatboat, selling produce from Memphis to New Orleans.

It was during these early years that Dole’s political life emerged, which eventually led him to Washington.

He was elected and served eight years in the Indiana House and Senate, before moving to Paris and opening a mercantile business with a partner, William Kile. 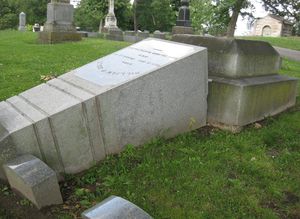 Dole established a home in Paris at the site of the present Methodist Park on Court Street. While living there, he developed a bond with a young itinerant attorney by the name of Abraham Lincoln, who is said to have frequented the home.

In 1860, Dole served as a delegate from Edgar County to the Chicago Convention where he took an active role in the nomination of Abraham Lincoln for the Presidency. When the successful election concluded, Lincoln invited Dole to move to Washington and accept a position in the new administration.

At that point, Dole sold his interest in the shared business and moved to Washington where he participated in the inauguration on March 4, 1861. A few days later Dole was nominated and confirmed as Commissioner of Indian Affairs. The friendship endured until the death of Lincoln.

The 1879 Edgar County history book describes Dole as a “public-spirited citizen, taking part in public improvements … for the benefit and advancement of the community at large; … a strong Antislavery man who espoused the cause of human freedom … eminently successful in whatever he undertook; positive in his opinions and convictions.”

The monument of tribute to this early Paris resident is located near the center of Edgar Cemetery, on the oldest and highest point. After the repair which took place June 15, it now has been righted, and stands proud and tall once again. A final cleaning will restore its grandeur.