In Recognition of Outstanding Military Service ...

For nearly a half-century, a standard issue military marker has denoted a rather obscure grave in Edgar Cemetery.  The veteran buried here served 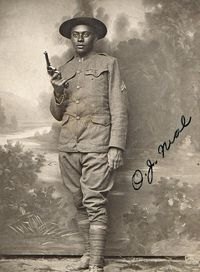 his country in three conflicts over a span of 30 years.  He first answered the call of duty about 1916 and was assigned to the African-American unit of the Eighth Illinois National Guard.  Too young at the time, he misrepresented his actual age in order to be accepted.  And thus began his military affiliation.

His name was Otis J. Neal, and his dedication to country is being honored Memorial Day weekend with a military tribute as family, friends and the public gather to remember his exceptional contributions as a veteran. A new stone will be unveiled which proudly declares his military service and his rightful place among honored veterans.

Edgar Cemetery board president Jim Englum explained the reason for the tribute.  “Neal was a local, dedicated veteran who served his country during three conflicts, and his grave does not reflect this,” said Englum. “It was the late Jack Asher, a local attorney, long-time cemetery board member and friend of Neal’s, 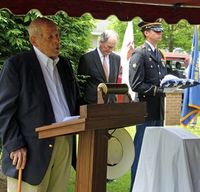 whose goal it was to erect a fitting monument which records Neal’s outstanding and unique dedication to his country.”  “Jack set in motion the plan to make this happen,” Englum continued.

At 11 a.m. Saturday, May 24, a public gathering in Neal’s honor assembled at the southeast corner of Edgar Cemetery to conduct a brief service and to unveil the new stone marker, with the help of military and civic personnel.  A large crowd was on hand as we recognized this special veteran on Memorial Day weekend for his contribution to our country, and thus our community and our freedom. 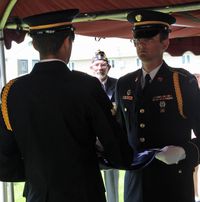 Camp Logan in Texas for training, but as tensions escalated between Mexico and the United States, the unit was assigned to protect the border, under the leadership of Brigadier General John J. “Black Jack” Pershing.

Other Army units followed Pershing into Mexico against the paramilitary forces of a Mexican revolutionary by the name of Francisco “Pancho” Villa. Increasing clashes led to a very real threat of war between the United States and Mexico.

Before the end of the expedition, most of the National Guard was Federalized and concentrated on the border to protect American people and interests. Along the border, the troops were on constant alert as border raids remained an occasional issue. Troops were withdrawn from Mexico in February, 1917, when normal relations were restored between the two countries.

The Mexican Expedition served as an excellent training environment for the officers and men of the National Guard who were recalled to Federal service later that same year for duty in World War I.

World War I and II

Neal found action again in 1917 when his National Guard unit was activated by President Woodrow Wilson for Federal service in the Great War, or World War I. 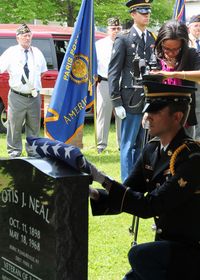 Most notable of Neal’s military experience was his service in World War I. In 1917, he enlisted in the 370th regiment, and in April, 1918, set sail to France, where he remained until February, 1919. He was soon discharged thereafter when the regiment demobilized March 11, 1919.

During World War I, the 370th infantry served with distinction with French Infantry Divisions in many battles, including the battles of Lorraine and Aisne. Neal participated in several notable conflicts. At some point in time, he also played on an African-American football team while with the 8th Infantry, as seen in an old photograph in possession of his family. This global war which centered in Europe began July 28, 1914, and ended Nov. 11, 1918.

Following his return to the U.S. and the end of World War I, Neal was personally recognized by the French military and received a letter of commendation, thanking him for his exemplary service. Neal was discharged in 1919 and returned to the home of his parents in Paris. World War I is recognized as one of the largest and most deadly conflicts in history, paving the way for major political changes and revolutions in many nations.

About two decades later, global unrest eventually led to World War II as conflicts which began in 1939 escalated around the world. The Eighth Infantry, re-designated the 184th Field Artillery Regiment, was subsequently inducted into Federal service January 6, 1941, to begin intensive combat training. Neal was inducted Oct. 8, 1942, in the regular Army. The unit is credited with serving in the European Theater, and Neal eventually achieved the rank of U.S. Tec Sgt. 956 Quartermaster.

Some records and family remembrances indicate that Neal served in this capacity in Northern Africa with the 956th Medical Transportation Company before the war ended in 1945. His daughter recalls that he talked about carrying a typewriter “all over Africa.”

Paris was Neal’s home throughout his life, and he is buried in the county’s largest cemetery. He was born Oct. 11, 1898, in Pleasureville, Ky., but moved to Paris at a young age with his parents, James Henry Neal and Elizabeth Coleman Neal, according to the family Bible. 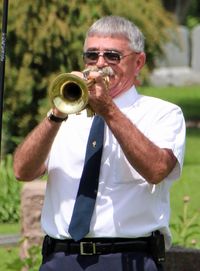 He married Mary Jean England of Kansas, who died in 1964 at the age of 39. Neal’s descendants include a daughter, Sandra Neal Darby; two granddaughters, Deedra Darby Jones and Chastity Darby Arrasmith, and three great-grandchildren, Jordan Arrasmith, who will sing during the tribute, Mekenzie Arrasmith, and Jada Jones.

At the time of his death, a sister Hattie Mae Thomas also survived. He was preceded in death by three brothers and two sisters.